You are here: Home / House / Transforming furniture with chalk paint

A non-DIYer is converted to chalk paint

Are you sick of some of your old furniture, find it hard to find replacements you like, or wish you could transform a bargain from a junk shop?

I had begun to dislike this bookcase intensely until I realised that chalk paint could turn it into something just like the pieces I admire in expensive shops!

It’s one of the pieces I acquired in the 80s, when stripped pine was all the rage, but over the years they’ve become distinctly orange and shiny. 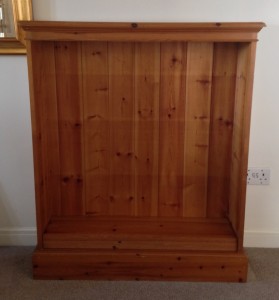 Chalk painting is far from new, of course, and for ages I meant to attend a course at a shop in Bath that sells Annie Sloan paints, but never got round to it. Then it occurred to me to check it out on Youtube (is there any activity left on earth that someone hasn’t made a Youtube video about?)

The videos I found, both by Annie Sloan herself, and American Christen Bensten, convinced me to just have a go – if it all went horribly wrong I could always repaint.

I discovered from other videos that I could make chalk paint myself, but decided to stick with a reputable brand so I had some idea what it should look and feel like.

I chose Annie Sloan’s Paris Grey for the bookcase. There are some gorgeous bright colours in the range too, but this seemed like a good neutral that would blend well with our other furniture. 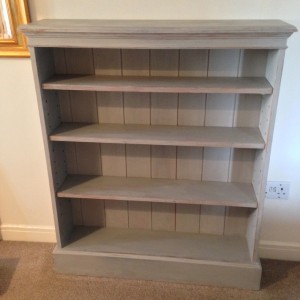 Chalk paint is a great option for lazy people like me who hate all the usual pre-decorating preparation (well, all DIY actually). You don’t have to rub down before or after each coat of paint, just slap on as many as you need.

The paint dries very quickly so you have to work quickly and if you try to go back over an area once it’s started to dry you get lumps of paint. But again, no big deal, you can sand them off later.

I did two coats, and as I wanted a distressed finish it didn’t have to be totally even, which is good when you’re a beginner. The sanding bit to get the worn-in look is very satisfying, and you can do as much or as little as you want. I tried to guess where the most wear would be on the bookcase so it looked like a piece that had been a bit bashed over time.

I found waxing is easier when you use a generous amount. It’s not like polishing shoes, where you are sparing and work it in over small areas. The wax is soft, and I put it on with a cloth (old T shirt), firstly because I didn’t want the expense of buying a wax brush, and also because then I could throw the used cloth away and not have the bother of cleaning a brush.

You can get light wax and dark wax. The light wax darkens the colour when you put it on but then dries paler again. It takes away the unpleasant chalky feel of the paint so the furniture feels smooth. Dark wax gives a more antiquey, aged feel that I’m not so keen on. 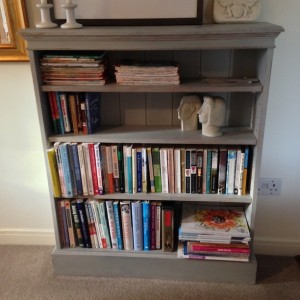 I’m delighted with the result. I think it’s come up a greeny grey, while A thinks it’s blue-grey! However you describe it, it’s a lovely, soft colour, and an unexpected bonus is that the painted piece doesn’t intrude as much into the space as its shiny orange previous incarnation, so the room looks bigger.

My second project was this chair. Our table has a painted cream base so I thought it would be nice to have a couple of painted chairs to mix and match with the old wooden Windsor chairs that came from my grandfather’s farmhouse kitchen. 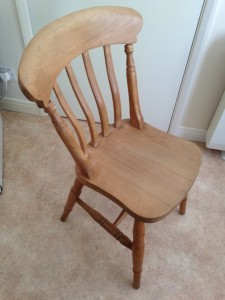 I debated getting Annie Sloan Cream paint, but looking at the website I noticed that Old White was a colour recommended to mix with lots of other colours, so I got that to use alone, and to mix with Paris Grey to make a paler grey for other pieces.

Again I did two coats and then sanded edges. I found it wasn’t so easy to get the effect I wanted on a chair, and I also wish I’d gone with the cream after all, as the white looks a bit stark with the other chairs and table. I might redo it at some point, but for now it’s fine. 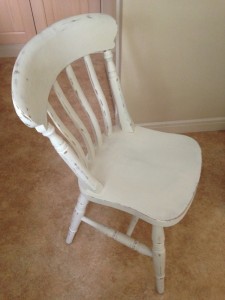 My next projects are the base of the kneeling chair I use at my desk and the old wooden trunk the television sits on. The great thing about chalk paint is that you get results so quickly you’re encouraged to keep going.

Have you used chalk paint to revive old furniture? Were you pleased with the results? And how well did it wear?

This site uses Akismet to reduce spam. Learn how your comment data is processed.

And after the saffron chicken...Muhallebi with ros

Ottolenghi saffron chicken - a feast for the eyes

I wonder why I never noticed this gate before. Per

Homemade granola from the recipe given to me by Si

I’d happily frame the bottom of this upturned bo

And just along the bench in the last picture, Loui

The sun setting over Mount’s Bay casts a mellow

I was on the Radio 4 programme Out of Office this

I love the granite steps that lead up the outside